With limited access to water, SASOL has engaged the use of Dry-land Farming Techniques (DFT) to boost the capacity of local farmers. DFT is a method for the cultivation of crops when irrigation is not possible. These techniques are effective when the right crops are selected, limited moisture is stored in the soil properly, and growing methods make the best use of this moisture. By implementing DFT, farmers are able to strengthen their probability of harvesting crops, even when the rains fail to come. 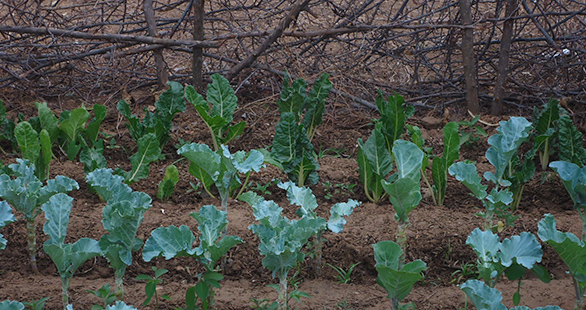 A zai pit is a planting hole with a length, width, and depth of 60cm each. The pits are dug during the dry season so that top soil can be mixed with the decomposed organic matter underneath, and then refilled into the pit. After the first rainfall, it is time for the farmers to plant in those pits. The Zai pits function during production by concentrating the nutrients and moisture availability at the beginning of the rain season, prolonging the life of the crops for increased yield.

Farming family standing inside the Zai Pits they dug

Terracing is a method of shaping land to control erosion on the slopes of hills or mountains. Modern practice in terracing consists of the construction of low-grade channels or levees to carry the excess rainfall from the land at non-erosive velocities. The physical principle involved is that when water is spread in a shallow stream, its flow is inhibited by the roughness of the bottom of the channel. Therefore, the water’s erosive effects are reduced, and more water is stored in the soil along the channels. The best place to store water in semi-arid areas is in the soil due to increased rate of evaporation in the dry months.

Since direct impact of rainfall on bare land churns up the soil and the stirring effect keeps the soil in suspension via over-land water flow, terracing by itself does not prevent sheet erosion. It serves only to prevent destruction of agricultural land by gullying and must be supplemented by other erosion-control practices (grass cover, cover crops, crop rotation, mulching, etc.). 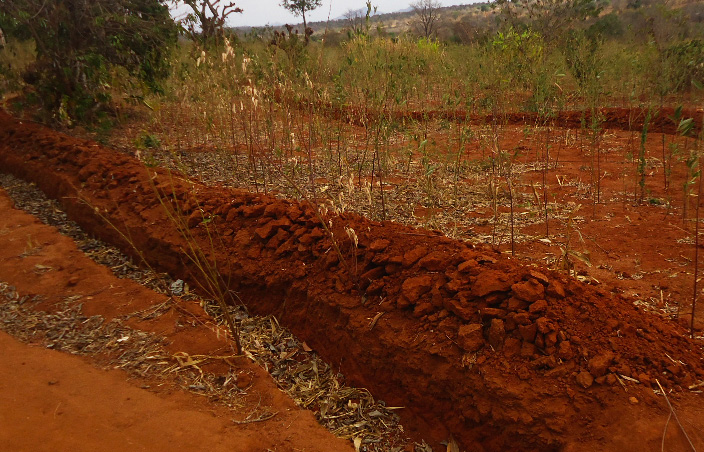 Terrace prepared on one of the farms

Cover cropping is necessary to reduce soil moisture loss through evaporation. SASOL advises local farmers to plant dolichos lab lab as a cover crop for sorghum since the dolichos has the ability to restore soil fertility up to 120%. Over a year, 1 acre of land requires 8 tons of manure to restore fertility. By using dolichos lab lab as a cover crop, the same can be restored effectively and efficiently in the same amount of time. Cover crops should be rotated just as regular crops are rotated after each production season.

Compost is decomposed organic matter that has been broken down by various bacteria and fungi. It is a preferred alternative to synthetic fertilizers. It builds up organic nutrients in the soil and helps restore natural symbiotic balances in the soil profile.

A kitchen garden is a small plot of land in which vegetables (i.e. kale, onions, and tomatoes) are grown for household consumption. This is meant to make use of kitchen waste water which is sieved to remove left over food and involves small irrigation practices by use of water cans or buckets. SASOL advocates for kitchen gardens because it lowers the cost of purchasing vegetables from the market, and helps foster a sense responsibility and achievement in providing fresh vegetables for the family meals.

Farmer working on her kitchen garden

We focus on two major components of the value chain:

PRODUCTION: early land preparation is key in crop production and allows for early planting of crops. Having the soil ready allows the seedlings to emerge rapidly, uniformly, and permits the young plants ready access to the vital resources of nutrients, water, and aeration at the start of the rainy season.

MARKETING: the beneficiary households are trained on marketing strategies where group marketing is emphasized to ensure that they have increased bargaining power for their surplus produce. We also facilitate group linkages to potential buyers and service providers. Through our marketing interventions, we work to establish group independence to ensure continued income generation beyond the SASOL project period.

Practical guidance and supervision on dry land farming practices are provided by the agricultural extension officers to the food security groups. The farmers are guided on green grams, sorghum, and vegetable production cycles, as well as kitchen gardening practices. Food security groups are visited periodically, and individual farmers are visited once every two months.

Posted by admin on Jun 19, 2015 in DFT Projects | Comments Off on Lower Yatta Cooperative 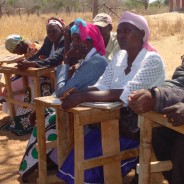 A co-operative has been formed in Lower Yatta which helps farmers located in that area sell their produce collectively. Farmers are linked to potential buyers and service providers who buy the produce at a higher price compared to the current price when farmers sell directly to the market or sell individually.